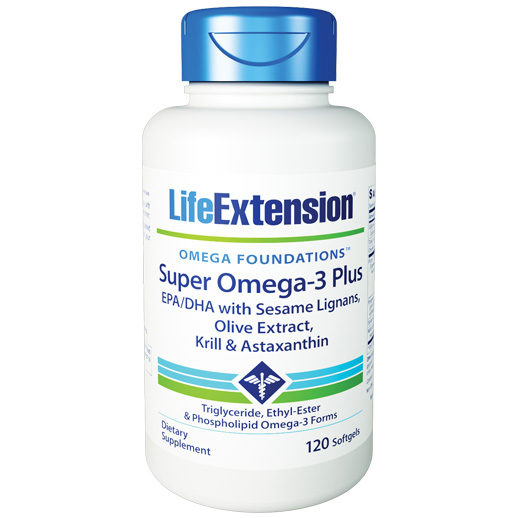 Discount prices will be shown in the shopping cart.

Researchers have long known the benefits of the omega-3 fatty acids found in the Mediterranean diet, but now a new branch of research is showing surprising results: omega-3 fatty acids from different sources have complementary benefits throughout the body. As part of our OMEGA FOUNDATIONS® line, Super Omega-3 Plus EPA/DHA with Sesame Lignans, Olive Extract, Krill & Astaxanthin provides omega-3 fatty acids from krill oil and fish oil, which together have been shown to provide enhanced support for your cardiovascular system and your brain.

Made with fish oil so pure, it exceeds international standards.

This OMEGA FOUNDATIONS® supplement features a sustainably harvested fish oil made from wild caught cold-water Alaska Pollock and processed in the United States within hours of harvest for exceptional freshness. It is produced with a proprietary technology that purifies the fish oil with a highly advanced distillation process that reduces environmental pollutants. The result is a fish oil so pure, it actually exceeds standards set by international rating agencies. And it’s also produced from a Marine Stewardship Council (MSC) certified sustainable fishery that is dedicated to sustainable harvesting practices and protection of the fishery ecosystem.

This formula has been fortified with additional astaxanthin, which is naturally found in krill oil. Astaxanthin is a powerful antioxidant carotenoid that has been shown to control free radical activity and boost mitochondrial function. A large body of research suggests that astaxanthin helps support joint, DNA, brain, cardiovascular, immune, and mitochondrial health. It also supports healthy blood glucose levels for those already in the normal range, and protects sensitive cells in the eye.

Additionally, this formula has been enhanced with a standardized olive fruit polyphenol extract. Research shows that polyphenol extracts from olive fruit help protect normal LDL cholesterol from oxidation. Each serving (2 softgels) provides a similar olive polyphenol level as over 4 tablespoons of extra-virgin olive oil. This assumes 318 mg/kg of olive polyphenol in extra-virgin olive oil as reported for Bertolli Extra Virgin Olive Oil. Please note other components in olive oil include monounsaturated fat, squalene, tocopherols, and phytosterols. Ingestion of olive oil may provide additional benefits beyond olive polyphenols. The combination of olive oil and fish oil is more effective with inflammation than either placebo or fish oil alone.

With a natural lemon flavor added to improve taste and palatability, this formula provides both fish oil and krill oil together to maximize your omega-3 benefits and powerfully boost your health. Add it to your regimen today!

Supportive but not conclusive research shows that consumption of EPA and DHA omega-3 fatty acids may reduce the risk of coronary heart disease.

Ratings based on results of the 2018 ConsumerLab.com Survey of Supplement Users.
www.consumerlab.com/survey2018.